The Lord has delivered me into the grip
of those I cannot resist. (Lamentations 1)

Readers have written to ask why Studio Matters had gone quiet. There was the September essay in The Federalist on art work about 9/11 by eighth graders in 2011. After that, only radio silence.

There was—still is— much in need of saying. I am simply not the one to say it. The catastrophic cruelty and ignorance—assuming it was ignorance rather than demented malice—of the manner in which the Biden regime fled Afghanistan are beyond my capacities for coherence. Better to leave the searing magnitude of the devastation, the bloody horror of it, to others.

Since our Potemkin presidency began in January it has gotten harder to stomach the news. All I can do is curse the grinning agents of my country’s precipitous descent into the disarray of a failing state. Damn the entire confederacy of authoritarian absurdists. Choose a circle of hell for every posturing facilitator of our disintegration into Third World incompetence and anarchy.

The speed of our collapse is breathtaking. 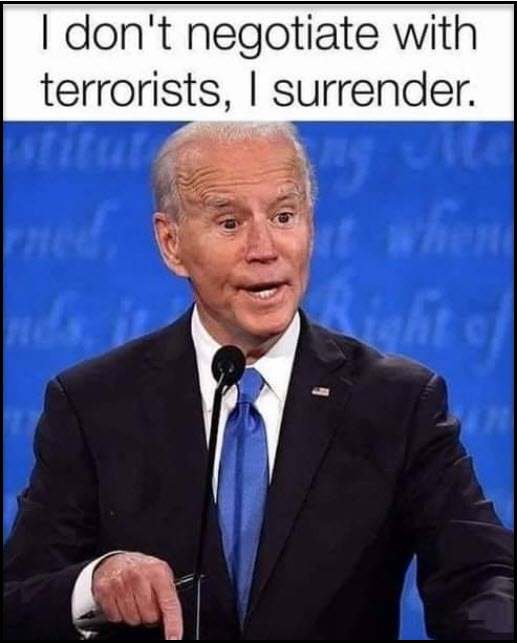 “Surrender? Nuts to you!”

In what history called the “Battle of the Bulge [2],” the 101st Airborne Division of the United States Armed Forces was caught in Bastogne while German armored divisions encircled the town.  It was outnumbered, outgunned, and running out of food. Medical supplies were low. So was ammunition. Assistant division commander Brigadier General Anthony McAuliffe was up against dismal prospects.

The German forces knew it. On December 22, 1944, they sent the American troops an ultimatum demanding “the honorable surrender” of the town within two hours. General McAuliffe’s [3] reply was brief: “Surrender? Nuts to you!”

Try to imagine McAuliffe’s response to today’s military brass who have transcended interest in winning wars. Pronouns, white rage, and flight suits for pregnant aviators are the new military matters. We are in the hands of cretins.

Mencken: “People deserve the government they get.”

Each day’s news brings to mind the title of Alan Paton’s 1948 novel Cry, the Beloved Country. The title stings. Applied to our own country, despite different conditions and causes, the words well up in the throat like a sob.

After a time, shock gives way to grief. There is no solace for it.  We have lost something living, an active and  vigorous sense of honor and the historic legacy of our Founders, architects of our Constitution.

At this writing, the Public Design Commission, which oversees the city’s public art, will remove a statue of Thomas Jefferson [4] from the chambers of the New York City Council. It has taken twenty years for opponents of the statue, installed in 1915, to win its battle. The commission “voted 8-0 Monday [October 18] to relocate the statue at the behest of members of the City Council’s Black, Latino and Asian Caucus.”

Jefferson’s genius on behalf of a young nation, one struggling to cohere, counts for nothing. In the end, he was just too white. The racism of historically ignorant office holders is celebrated as virtue by a mindless, resentful electorate. 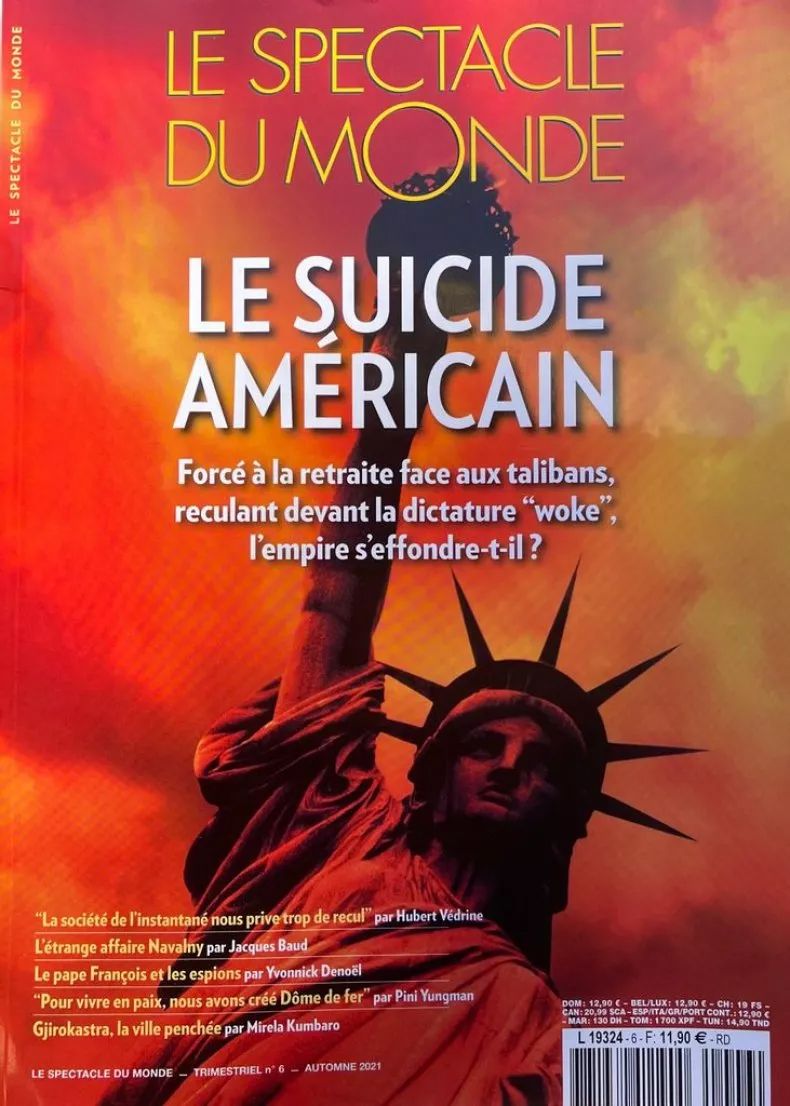 “Let’s go Brandon” and the legacy of Thomas Bowdler

Thomas Bowdler [6]published the first volumes of his The Family Shakspeare [sic] in 1807. It was an expurgated edition in which “words and expressions are omitted which cannot with propriety be read aloud in a Family.” His blue-pencilled rendition intended “to present to the public an edition of his Plays which the parent, the guardian, and the instructor of youth, may place without fear in the hands of the pupil . . . and which may improve his moral principles, while he refines his taste.”

A people who pull their hems back from the sound or spelling of words—which they might use themselves under duress—are a people crippled by propriety in their response to evil. Exaggerated anxiety for respectability, is a kiss of death in confrontation with malevolence. Bowdler’s “delicacy of expression” is no weapon against stupidity or poisonous ineptitude.

The mocking chant “Let’s go Brandon” is a clever battle cry. It scans perfectly with “Fuck Joe Biden” without offending tender ears. Or, when it appears in print, delicate eyes. But all bowdlerized spelling—e.g. “F**k Joe Biden”—is a false courtesy. A self-regarding feint. The mind’s ear translates the bleep without embarrassment; it hears the entire word. The mind’s eye, an impish organ, fills in the redacted letters before the retina moves on.

In the face of deadly criminal dereliction, nervous bowdlerism is an empty gesture, a demure avoidance mechanism that misplaces sensibility ahead of sense. Certain actions are so indecent, so cold-blooded and depraved, that not to hurl obscenities at them is an abuse of language.

But isn’t that the language of the vulgar mob, you say? No, certainly not in this instance. Not at all. The raw essence of obscenity oozes pitilessly from a rancid regime and its apparatchiks in the military, academia, government, and a polluted media.

Also, in a somewhat different guise, from Rome.

The fatuity of nebulous papal prayer

We have a pope who promotes a soft nihilism delivered in a Christian idiom. As the Taliban swept into Kabul, Francis stood [7] on his balcony to invite all and sundry—tantamount to no one in particular—to pray for a chinwag:

“I ask you to pray along with me to the God of peace so that the din of weapons ends and that solutions can be found around a table of dialogue,” he said.

Could there be a greater burlesque of prayer than that? Nothing could have been more inane. What does it mean to dialogue with sworn enemies lusting to destroy us? Francis’ “table of dialogue” is a euphemistic contrivance for brokering the difference between good and evil, between sound judgement and absurdity. The Chair of Peter groans under the weight of a left-leaning megalomaniac who presumes God speaks when he does.

The “din of weapons” is just beginning. Lights are back on at the Bagram Airbase. The Taliban are taking victory laps. They have triumphed over a superpower. And they gained weaponry that is the envy of nations.

He let the enemy gloat over you
and exalted the horn of your foes. (Lam 2)

Stay awhile with Francis’ balcony performance in August. We cannot afford to forget that his “God of peace” is also the God of wrath. “Before Abraham was, I Am.” God is beyond all change. The God of Abraham, Isaac, and Jacob—the LORD God of Israel—remains with us still. “God is a righteous Judge, a God Who has indignation every day” (Ps. 7).

Our rosewater hierarchy ignore what used to be called “the Seven Woes of Jesus.” This, from Matthew 11, is one of them:

Woe to thee, Chorazin, woe to thee, Bethsaida: for if in Tyre and Sidon had been wrought the miracles that have been wrought in you, they had long ago done penance in sackcloth and ashes. [22] But I say unto you, it shall be more tolerable for Tyre and Sidon in the day of judgment, than for you. [23] And thou Capernaum, shalt thou be exalted up to heaven? thou shalt go down even unto hell.

In the vocabulary of Jesus’ day, “woe to thee” was a solemn malediction. A curse. To call down woe on someone’s head was to wish them the ultimate misfortune: “To hell with you.” God’s mercy and loving kindness rank high in the subject headings of garden-variety homilies. But these do not supplant just anger. They accompany it. Righteous indignation toward evil and the hazards of human presumption is mercy’s correlative. It is because God loves man—so Jews and Christians believe—that His anger is kindled by the dead ends we choose for ourselves.

A timid clergy cannot maintain equilibrium in the tension between recognition of God’s wrath and His clemency. I ache to hear from the pulpit a rousing, masculine: “Woe to you, Joe Biden.” “Woe to you, Mark Milley.” “Woe to you, Lloyd Austin.

At the bottom of every article on The Imaginative Conservative [8] this afterword appears:

The Imaginative Conservative applies the principle of appreciation to the discussion of culture and politics—we approach dialogue with magnanimity rather than with mere civility.

Magnanimity is due ones fellows, not ones enemies. White glove courtliness—indiscriminately applied—is the fatal flaw of conservatives.