Yom Kippur, the holiest day of the Jewish year, began Tuesday, October 4, just before sundown and will last until nightfall this evening. This Day of Atonement is marked by fasting for twenty five hours, extended synagogue services, and penitential liturgies. It is a day to afflict the soul with recognition of one’s sins, with repentance, pleas for forgiveness, and determination not to offend ever again.

Sacred stress on this “Sabbath of all Sabbaths” is on sins against God. Offenses against other people require reconciliation with the person sinned against. Amends must be made to the injured party before seeking God’s forgiveness on Yom Kippur. That is harder than prayer, harder than interior penance. Biblical man trembles toward atonement. 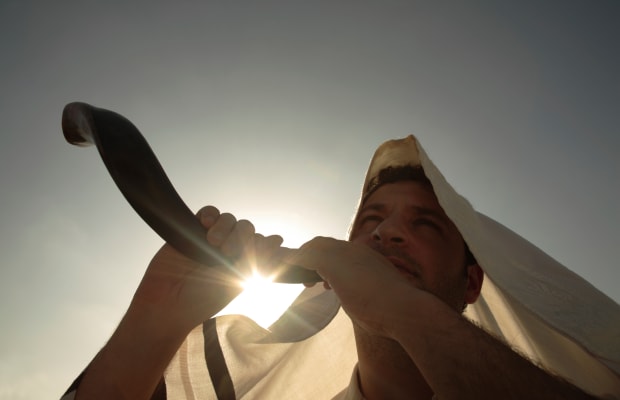 At its core, the Catholic Church’s Act of Contrition is a very Jewish prayer. It is the last thing a Catholic recites in the confessional box. Here too, emphasis is on sins against God. (Hailed in the Nicene Creed as “the Father almighty, Maker of heaven and earth, and of all things visible and invisible.”) The listening priest offers absolution only after the penitent prays the Act of Contrition:

O my God, I am heartily sorry for having offended Thee. I detest all my sins because of Thy just punishment; but most of all because they offend Thee, my God, who art all good and deserving of all my love. I firmly resolve, with the help of Thy grace, to sin no more and to avoid the near occasions of sin. [Wording varies. I say the words learned in childhood. No need to update.]

That firm resolve demands the same effort at conciliation—a chastening pursuit of personal rapprochement—that is Judaism’s bequest to the Christian conscience. Jesus of Nazareth, Torah-true, phrased it this way:

Therefore, if you are offering your gift at the altar and there remember that your brother has something against you, leave your gift there in front of the altar. First go and be reconciled to your brother, and then come and offer your gift. (Matt. 5: 23-24)

Drop everything! Go try to make up! Harder than it sounds. Jesus’ injunction comes down to us over millennia. It will endure for as long as Christians keep the ethical dimensions of penance bound to the religious.

On Yom Kippur, the Torah verses recited in Synagogue through the day are from Leviticus: “For on this day atonement shall be made for you to cleanse you of all your sins; you shall be clean before Adonai.” (Hebrew for “Lord”)

Ego te absolvo. “I absolve thee of all thy sins.” My confessor intones the ancient formula. I hear it in wonder and in gratitude. Yet still . . .

My silk Atonement Quilt was begun over Yom Kippur when my children were small. (Sewing was the only way I could work with children at home.) As always since then, it hangs from a rod on a dining room wall. Just under six feet long, it is hand quilted, machine pieced in liturgical colors. The chroma of Lent, martyrdom, and mourning—daily reminders that beauty will not save us from the sorrows of living.

If contrition is indispensable for healing the wounds and disease caused by guilt and sin, an equally indispensable condition for inner freedom must also be self-accusation, the admission of one’s own guilt, the face-to-face confession before another person. This too seems to be a component of the wisdom tradition throughout the history of the entire human race, very much including the pre-Christian and non-Christian worlds.  .  .  . In Lydia and Phrygia, steles and stone tablets from pre-Christian times have been found on which confessions of guilt have been inscribed, available for any passer-by to read.

Until recent years, the Episcopal church in my town sounded its bells at noon. It was an echo of the eleventh century Angelus bell, a daily noontime devotion commemorating the Incarnation. I did not genuflect on the sidewalk at the tolling of the Angelus—as I did as an undergraduate on a Catholic campus—yet it thrilled me to hear it.

The Episcopal bell ringer is long gone. The carillon has been digitized. Little by little the electronic chimes accommodated the town’s increasingly secular population. It softened from a resonant metallic prayer to the melody (more or less) of Amazing Grace, the hymn celebrating slave-trader John Newton’s conversion. The theme of racial penance outweighed its Christian impetus. Now, it seems that even that gesture of multicultural sensitivity, coming as it does from a church belfry, offends the ear. The noontime carillon has gone silent.

What a different society we would have if those bells—the culture they signified—were welcome again. And suppose if added to them came, broadcast from Town Hall, the trembling staccato of a shofer on Rosh Hashanah and Yom Kippur? It will never happen, of course. Not in a community whose Town Hall flies the LBGTQ flag (together with the Ukrainian bi-color) on a flagpole erected next to the one carrying the Stars and Stripes. But be certain that when our planned twenty five thousand square foot Islamic mosque and cultural center is completed the muezzin’s call to public prayer will be heard on every cul-de-sac in the township.

Conscientiously observed fasting over Yom Kippur is arduous. The rigor of it—sustained for centuries—is a telling contrast with the gradual depreciation of the Eucharistic fast. The traditional fast began at midnight. Under Pius XII it dropped to three hours. Wanting to adapt to the complexities of modern living, Paul VI lessened it to one. Lost in the diminuendo was sense of the sacred. By now, there are young Catholics who do not know there ever was a fast.

For Yom Kippur, the cry of Psalm 25:7: “The sins of my youth and my frailties remember not, O Lord.”