Here within the orbit of Manhattan, masks are not merely tolerated; they are embraced. Obedience to Covidian biopolitics elevated masking to a sacramental act. It has become the secular analogy to sprinkling holy water or making the sign of the cross.

Merit accrues to a new ritual observance that effaces individual identity and desensitizes us to the complex role of faces in personal communication. This compulsive masking sharpens my memory of words that have stayed with me since girlhood: “By the time you are 40, you are responsible for your own face.”

That stern caution came from a woman equipped to offer it. Mary Jane Robertshaw, O.S.U., was the lively minded director of the art department at a Catholic women’s college from 1957 to 1997. A gifted weaver, sculptor, ceramicist, and scholar, Mother Mary Jane, as students called her, delighted in telling appearance-conscious undergraduates that the making of one’s face was not in our own hands as if it were clay on a potter’s wheel.

Instead, the tenor of our faces—their expressive tonality—is formed and fixed in the furnace of living. The lived life is a kiln that consumes facile ideas about how to create, or maintain, mortal beauty. Only moral imagination resists the old pagan cult of the body with its fixation on health and material beauty.

At a certain age, Mother insisted, every face is stamped—who knows how?—with the character of our choices, of what we have found worthy of praise or blame. It is inflected by those things we pity and those we censure or resent. In the eyes of this Ursuline nun, a face is the work of our minds. Incised on it is the texture and reach of our hearts. Call it soulcraft.

By quoting Gerard Manley Hopkins, Mother gave voice to a religious instinct that sees faces through an enchanted lens, one that gathers and disperses light differently than a camera lens. Its means are suggestive, too indirect to sustain diktats that desensitize us to individual identity.

But as that instinct declines, desensitization advances. Faces covered, we become strangers to each other. Like corrosive salts seeping through a fresco, something caustic has begun working its way through social life. Faces and our responses to them have taken on an urgency previously unfelt. How to begin making sense of what the human face arouses in our lives, our language, our art, and—increasingly—our collective condition? Where to find a standpoint in a cat’s cradle of crisscrossing threads?

One way into the maze is Cicero’s familiar bon mot: “The face is a picture of the mind with the eyes as its interpreter.” Directing us differently is St. Basil’s dictum that “words are truly the image of the soul.”

Mother Mary Jane sided with Cicero. Any visual artist would. Literary arts live and die by the word. Not the plastic arts, certainly not portraiture. While body language whispers to all of us, we instinctively collect what matters most from faces. 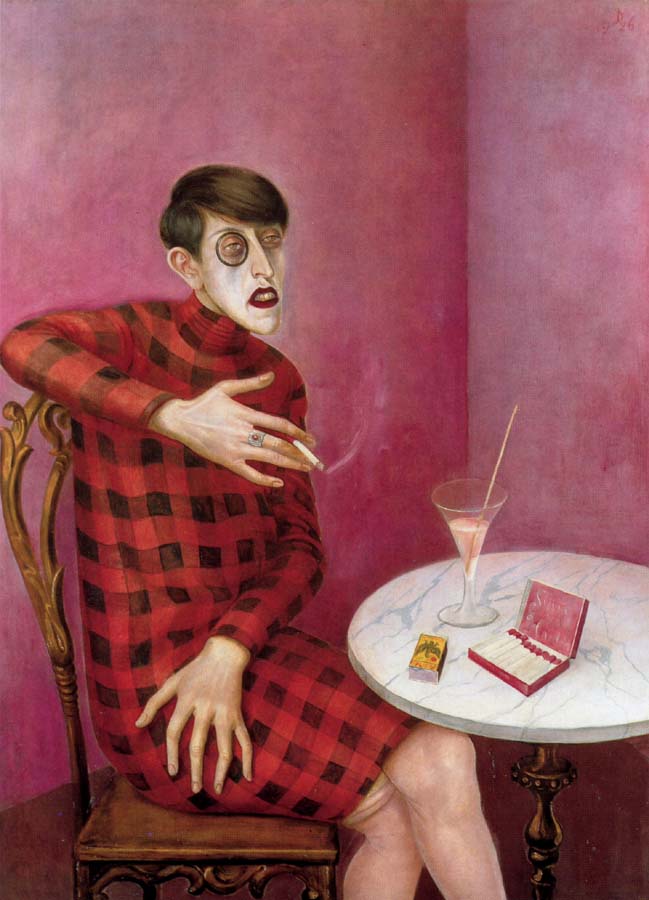 Stay a moment with Otto Dix’s 1926 portrait of journalist Sylvia von Harden. “I must paint you!” he exclaimed when he stopped her on a street. “You are representative of an entire epoch!” There is no mistaking his distaste for the emerging cultural type she embodied— Weimar’s smoking, drinking, masculinized neue Frau. Dix’s composition is set with props (e.g., the unsightly stocking roll, no wedding band, corner table for one) that signal his attitude. Nonetheless, full judgment on the psychological temper for which the figure serves proxy resides in the hauteur of that bemonocled face.

We can choose our words; we cannot choose our faces. The soul, unvoiced, does that for us. And it speaks differently. Cicero used the word mind, but added: “A man’s mind does not differ in color from his soul.” St. Jerome, a close reader of Cicero, rephrased it this way: “The face is the mirror of the mind, and the eyes without speaking confess the secrets of the heart.”

Both men believed that something of the soul bodies forth in the face. That ineffable something addresses itself directly to the eye, an organ of the brain that has its own way of knowing.

We confirm that reality by phrasing agreement with others in terms of “seeing eye to eye” with them. Language itself testifies to the emotive impact of a physical presence. Our vocabulary is rich with idioms that seize upon the face as the symbolic sum of our being and our primary instrument of expression.

English is a cornucopia of phrases built on the word face. Things stare us in the face. Face up to them. We take things at face value. We set our face against enemies who would wipe us off the face of the earth. He has egg on his face. Face the music. Lose face. Save face. Make a face. On the face of it. The list is long. Even clocks have a face.

Yet, like Nathaniel Hawthorne’s Reverend Hooper walking village streets behind a black veil, we rush to conceal our own. The fecundity of our language mocks us for it.

There is more to our compliance with masking than concern for disease prevention. Evidence for the efficacy of masks is far from conclusive. This, though, is not the place to argue the evidence. What matters here is a widening intuition that something additional—deeper—is afoot.

Has that sense of being an individual come to weigh too heavily on us? With the exit of Christianity from the public square, confidence is waning in the sine qua non of Western civilization: insistence on the primacy of the individual. As the claims of the collective increase, group identity moves personal identity to the margins of social concern.

Might the true thing hidden behind our masks be exhaustion with a quintessential principle of Western civilization?

Note: This essay appeared first in The Federalist under the title “What Hiding Our Faces Tells Us About The Condition Of Our Souls.”