Straightaway, my apologies for yesterday’s Mail Chimp broadcast that misspelled the name of the first respondent cited on the 303 Creative case. It is Aubrey Elenis—plus nine other parties. (Respondents are adversaries of the petitioner.) In my hurry to post on the selfsame day of oral arguments before the Court, I wrote Ellis instead of Elenis.

Web designer Lorie Smith owns 303 Creative. She is the sole petitioner, meaning that she alone asked the court to review her case. The number and tenor of arguments both for and against her refusal—on conscience grounds—to create a design celebrating same-sex marriage are an education in the thicket of legal argument. An army of amici curiae assert their interest in the case from a host of angles, each buttressed by as many applicable precedents as legal scholars can unearth.

Amicus briefs have appeared online in clusters over recent months. SCOTUSblog has the entire dizzying roster. The filings that interest me most are those hostile to Smith’s stance. One of these was drafted by the Tanenbaum Center for Interreligious Understanding, a NYC non-profit dedicated to erasing religious prejudice in the workplace. It offers a useful view into Smith’s high-minded antagonists. It argues that:

[1] A ruling in favor of Smith would “undermine religious liberty.”

[2] Free speech does not apply here. It is “incidental” to the right Lorie Smith seeks to protect.

[3] Even if Smith’s case were to be judged in relation to free speech, such freedom is “not a license to discriminate against others in the public square.”

[4] A ruling favorable to Smith might open a door to “impermissible discrimination” because of religion. [The falling domino principle.]

The Center supports its contentions, as is customary, with a hefty roster of citations: 35 related court cases, 16 codes and statutes, plus additional sources. Among them are the writings of James Madison. To follow the reasoning, go to the docket and read the brief in its entirety here.

A scan of only those briefs filed on August 18th is a trove of arguments that testify to everything that is riding on this case. Division among Catholics is part of story. Browse the amici curiae of 27+ Roman Catholics. Filed in support of Aubrey Elenis, et al., and the state of Colorado, it submits the pensées of theologian Robert Neville delivered at Boston University, 2006.

The most acute issues of this sort for Christianity onour current watch, however, has to deal with equal human rightsfor gay, lesbian, bisexual and transgender people… Those amongus who ‘just know’ that marriage is between one man and onewoman, and to think that it had to be between people of the samerace, those who find gays, lesbians, bisexuals, and transexuals tobe deviants from natural sexuality simply are enslaved to avisceral cultural code that itself is evil.

The professor’s reference to interracial marriage is an insidious red herring. It makes a false equation between race and homosexuality. That was some seventeen years ago. By now, persons with same-sex attractions are increasingly presented as a distinct ethnic group with their own mores, traditions, and mating habits. We do not frown on marriage among Italian, Polish, or Jewish Americans. It follows then that to disapprove of marriage between LBGTQ Americans can be nothing but bigotry.

The Catholic League filed an amicus brief in support of Smith’s First Amendment rights. Bill Donahue discussed this aspect of the case yesterday:

Critics of Lorie Smith maintain that the real issue is not the First Amendment. One of the most prominent persons to take this position is Father James Martin.

“Let’s call it what it is: homophobia,” Martin says. Now if this were true, Smith would have a record of refusing to serve homosexuals, but this is manifestly not the case.

Would Martin also call the United States Conference of Catholic Bishops “homophobes”? The USCCB filed an amicus brief in support of Smith. It would be great to hear from him about this issue.

Father Martin is wrong. Indeed, he misses the point completely.

There is a profound difference between refusing to serve someone because of his/her demographic characteristics, and refusing to affirm a message that runs counter to one’s sincerely held religious beliefs. 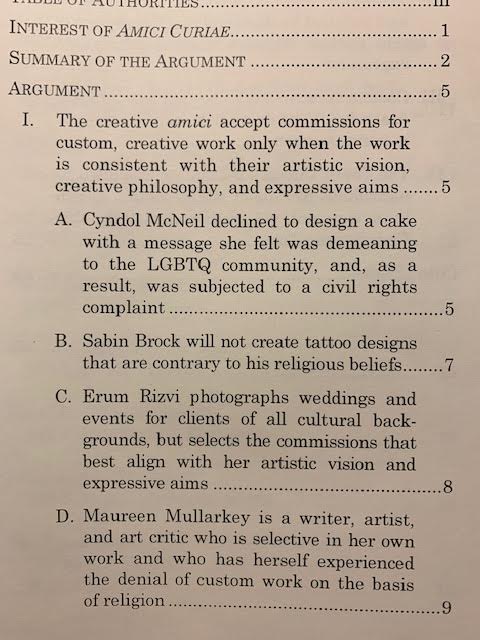 The brief I was invited to join steers clear of oppositional combat. There is a wealth of that on the docket. Instead, it takes a different tack by arguing for the primacy of creative integrity:

The creative Amici accept commission for custom, creative work only when the work is consistent with their artistic vision, creative expression, and expressive aims.

The brief is clever. It includes Cyndol McNeil, a gay woman, who declined a commission on conscience grounds which had nothing to do with religious belief.

Again, I wholeheartedly recommend browsing the docket of briefs. A dive into the various filings is fascinating, instructive—even, perhaps, ominous.  Personally, I found much of it more than a little menacing. The cultural drift away from toleration—live and let live—and toward mainstreaming of sexual deviance is evident between those lines where it is not overt.

With Katanji Brown Jackson—avatar of the diversity delusion—on the bench, it is safe to predict the direction of her judgment. We wait to see the rest. Final decision is not expected before late spring. May or June, 2023, thereabouts. Meantime, pray that freedom of conscience is not smothered by the ideology of race or sexual preference.