“O young Lochinvar is come out of the west”—West Coast, that is.

You have likely read the media pas de deux between Nancy Pelosi and her ordinary, Archbishop Cordileone. Forgive me if I am unsympathetic to His Excellency’s current “Rose and Rosary for Nancy” gambit. The sell-by date for talk about killing innocent life in the womb expired in September with passage of the Women’s Health Protection Act of 2021. Once the clock ran out on the utility of words, it was time for canonical action.

But the archbishop apparently has no stomach for consequential action, or any move that might risk reprisal. Instead, he has launched a pious-seeming crusade more suggestive of a personality cult than a thrust at abortion absolutism. Maggie Gallagher, executive director of Cordileone’s Benedict XVI Institute, chirped: “No bishop has ever done anything like this–publicly endorsing and calling for this kind of Rose and Rosary campaign for a major public official.”

Perhaps she has been reading Walter Scott:

He rode all unarm’d, and he rode all alone.
So faithful in love, and so dauntless in war,
There never was knight like the young Lochinvar.

The director solicits support in terms that converge the man himself with the issue : “Don’t let him fail. We need to show the world we are behind Archbishop Cordileone . . . . Here’s your chance to be an answer to the Archbishop’s prayer. Sign up now. Thank you for all you do for Jesus. For our Church.  And for this Archbishop as he leads.”

But the matter at stake is not about the archbishop. Moreover, he has already failed. He failed prior to the 2020 election. He failed by not rejecting the moral confusion of the USCCB voter guide that took care to salve the consciences of pro-Biden Catholics. The guide, a porridge of competing issues from climate change to “global solidarity,” sidled away from the indecency of abortion:

There may be times when a Catholic who rejects a candidate’s unacceptable position even on policies promoting an intrinsically evil act may reasonably decide to vote for that candidate for other morally grave reasons. Voting in this way would be permissible .  .  .  . 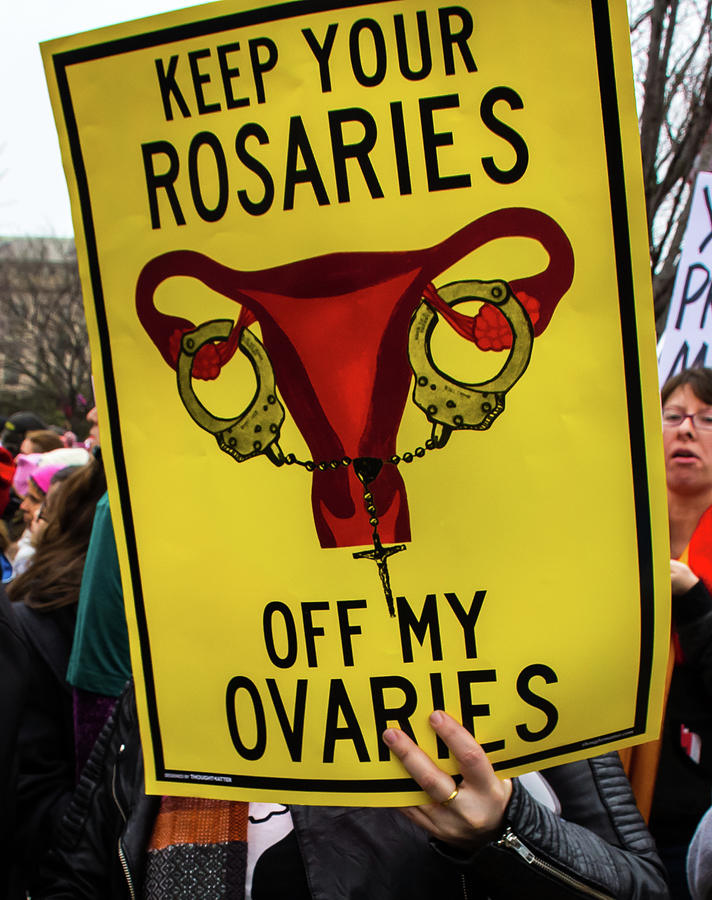 The key note of this campaign is strangely tone deaf. “Keep your rosaries off my ovaries” was a popular meme of the January 2017 Women’s March on Washington. Has the Institute  (founded by Cordileone to promote liturgical beauty) and its board of directors forgotten recent history? Showboating with rosaries is guaranteed to raise hackles among the legions who endorse Pelosi’s pro-abortion militancy. And which this arrogant, power-happy pol will never alienate.

Briefly, the initiative states: “Commit to praying one rosary a week and fasting on Fridays for her [Pelosi’s] conversion of heart. Please sign up for the ‘Rose and Rosary for Nancy’ campaign at BenedictInstitute.org, and a rose will be sent to her as a symbol of your prayer and fasting for her.”

If Pelosi’s reptilian heart converts, then what? Will she strip naked in the House Chamber and confess to her brothers and sisters? No matter if she does. The Women’s Health Protection Act will still stand. And Ocasio-Cortez & Co. will pick up the pro-abortion baton. In sum, Cordileone has created a publicity event devoid of any means of measuring its success. The abortion regime will roll on with or without Speaker Pelosi.

This campaign strikes me as largely a fundraising maneuver in cope and chasuble. Certainly you do not have to pay to say the Rosary. Prayer is free. But roses cost. So does packing and shipping. The website explains: “Upon submission, a rose will be sent to Nancy Pelosi on your behalf! [No telling if names, addresses, and party affiliations are included.] You will have an option to donate towards covering the cost of sending a rose on the next page.”

That next page hands you a form that suggests donations from $50 to $1000. Consider a recurring donation.

As of October 24, the number of roses sent was 14,159.  Had anyone thought to send Pelosi a dead fish instead? The stink of some 14,159 fish carcasses piling up in the mail room of her DC office would correspond perfectly to the stench of the abortion regime she represents.

By all means, pray. But prayer is no substitute for pushback. Using pious supplication—part theatre, part obeisance— is not prayer at all. Catholics on their knees in public, begging politicians for something that the posture of prayer will never get them, is skylarking. It is the mirror image of Pelosi, in a kente cloth stole, taking a knee to honor George Floyd. 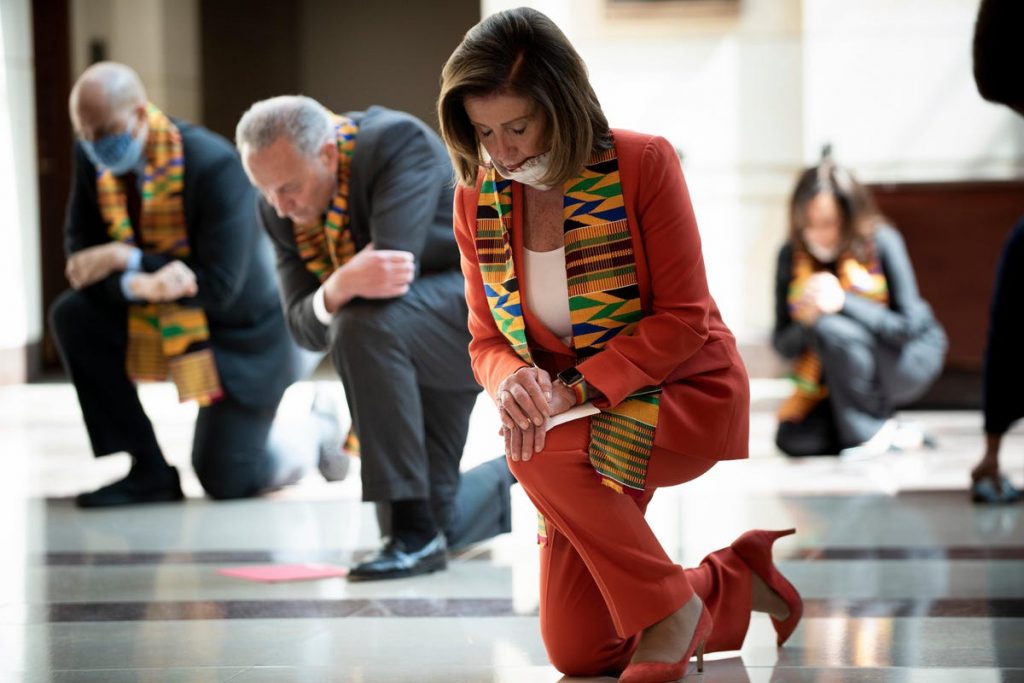 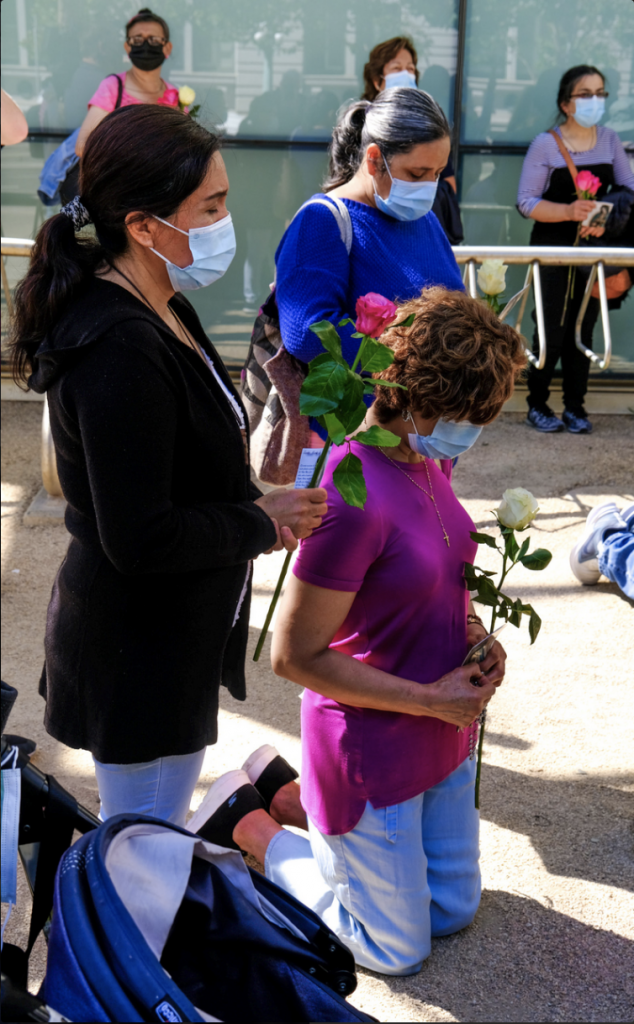 Jesus had a low opinion of ostentatious prayer: “When you pray, do not be like the hypocrites, for they love to pray standing in the synagogues and on the street corners to be seen by men … but when you pray, go into your room, close the door and pray to your father who is unseen.” (Matt. 6) 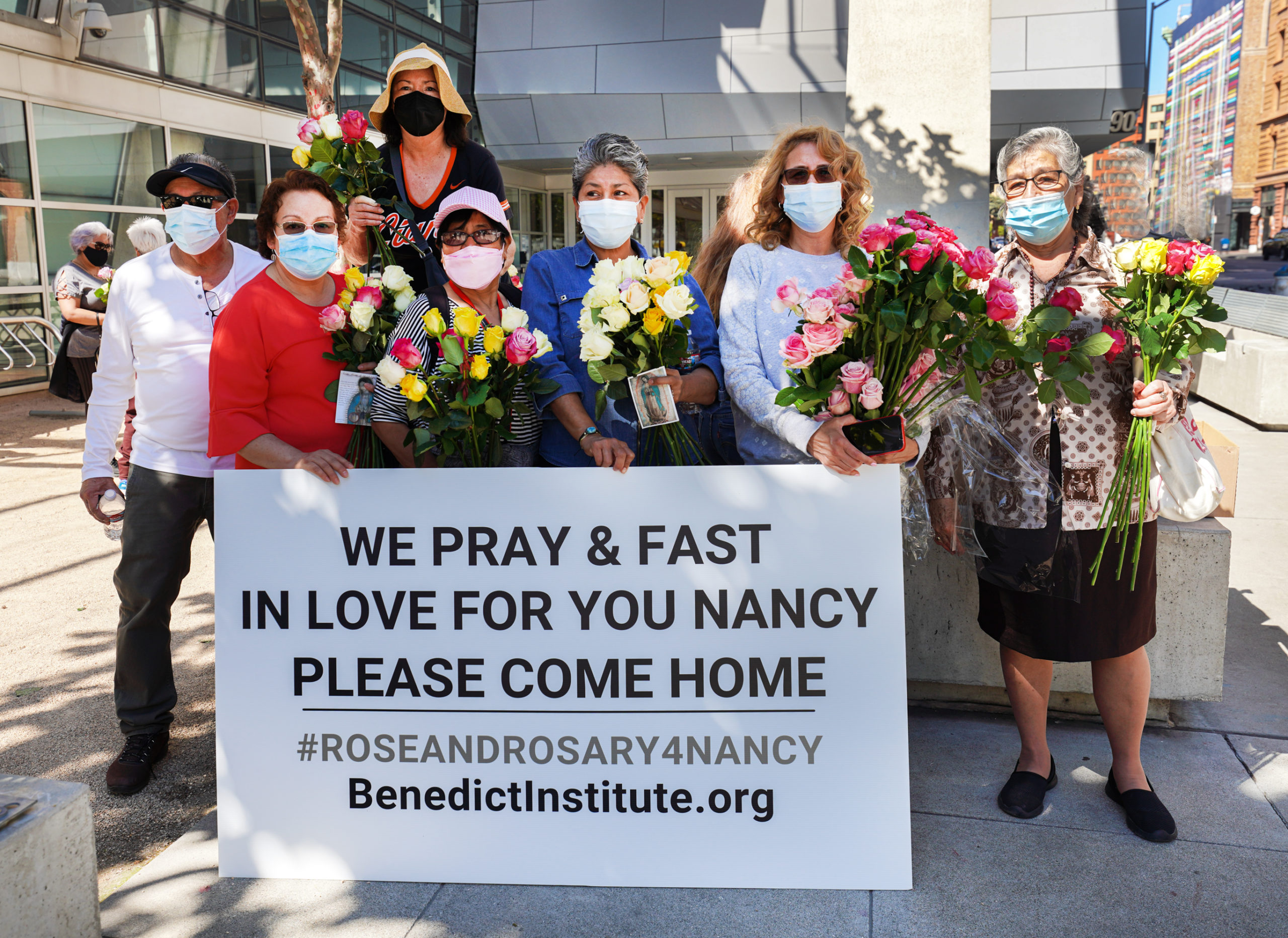 In love for you Nancy. How can you not wince? Sentimentality drains the word love of dignity and substance. Not for nothing do women dominate the photos. There is something womanish—unmanly—about an initiative that displaces the kind of confrontation required. Pathological niceness dooms its own intentions.

St. Boniface knew the difference between histrionics and purposeful action. And he suffered a mortal price for it. May the martyred Archbishop of Mainz whisper in clerical ears.

No Boniface, Cordileone is home free with “May the Blessed Mother touch her heart.” A weepy invocation, it obscures the stout-hearted Nazarene peasant girl we call Mary. A devout Jew who knew her people’s history, she named her son after a charismatic warrior: Yeshua (the Hebrew spelling of Joshua). Discounting the nexus of forces at work in support of abortion, the archbishop slumps into mawkish reliance on Pelosi’s “maternal heart.”

Even certain species of snakes exhibit something akin to motherly instinct. African python moms brood their eggs, keeping them warm before they hatch. Pit vipers earn points as the only species known to tend their living young. Rattlesnakes, too, have a reputation for parental care.

Read Matthew 23 to stiffen the spine

At this late point in the verbal volley between the pol and the archbishop, it would be more compelling if all of our sophistical shepherds took a cue from Matthew 23. The Matthean Jesus was no mealy mouth. He did not shy away from colorful invective. He took the gloves off against the hierarchs of his day: “blind fools, “ “snakes,” “brood of vipers,” “whitened sepulchers.” He made enemies by calling them “hypocrites.” He mocked them as “blind guides who strain out the gnat and swallow the camel.”

Those were fighting words. It was godly anger, but anger nonetheless. Rightful outrage is the necessary response to evil. And to the sin of office holders—from Foggy Bottom to the Vatican—who would make each of us “a child of Gehenna” to keep their public image up, their privileges intact, and their portfolios solvent.

Archbishop Cordileone insists that abortion is the “pre-eminent issue” of our time. Why, then, did he wait until Biden was safely elected to open a Twitter account in defense of the pro-life position? Biden’s pro-abortion militancy—plus his enthusiasm for same-sex marriage and transgender “rights” for children—was on full display prior to the 2020 election. Where was @ArchCordileone when it was critically needed? When it might have mattered?

Cordileone, like every man in the USCCB, knew quite well what they were getting in Biden. But they kept their mouths closed to any clear, unequivocal statement on what a Biden presidency would bring. What it augured was as inevitable as sun in the morning and the moon at night. They all saw it. Yet in the end, our cagey, compromised bishops shifted attention onto other issues.

Keeping the borders open in violation of our immigration laws appears to have been a more immediate priority than killing the unborn. Abortion—from a licensed “abortion provider” or a back-alley one [remember Emma Bonino]—is an evergreen. Our hierarchs could talk about it after the presidential election. What was most urgent in November 2020 was protection of Church participation in the illegal alien racket. The USCCB’s voter guide, updated in anticipation of the 2020 election, was an evasive inventory of issues that, by sheer volume, effectively sidelined abortion.

President Trump had to go. He took seriously the lawful requirements for refugee status. That reduced the flow of resources to resettlement agencies managed by the Church. In short, fewer “refugees” meant less tax-payer money for refugee relocation, fewer dollars for government-funded services and distribution of benefits. The USCCB gains from the  subversion of our immigration laws.

Trump was sympathetic to the pro-life cause but a danger to federal funds channeled to bishoprics on behalf of illegals (and now, unvetted Afghans). So Archbishop Cordileone waited until Trump was safely out of office before upping his own profile as a pro-life champion. Not until April 2021—when the migrant industry was again secure—did he bravely open a Twitter account to promote an inoffensive campaign. And his own preeminence.

“Have ye e’er heard of gallant like young Lochinvar?”

Until we hear “Woe to you, Madame Speaker”—from a bull-horn, please—Cordileone’s rosy schtick will remain what it is: risk-free grandstanding. A slushy PR pantomime that appeals to Catholics who confuse gestures with action. Catholics with a taste for schmaltz. 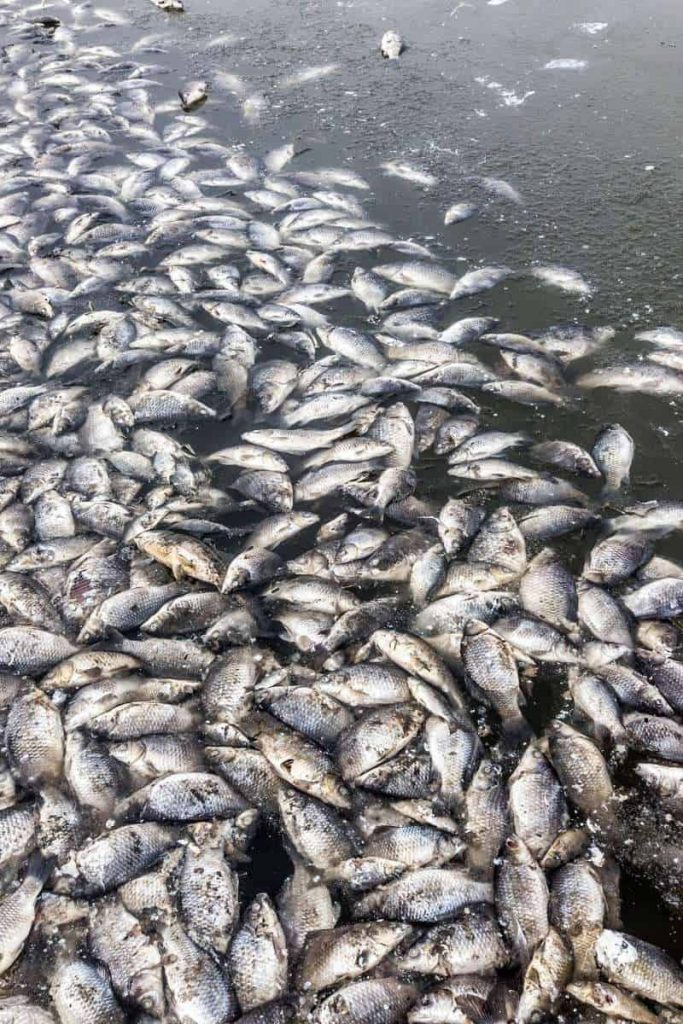