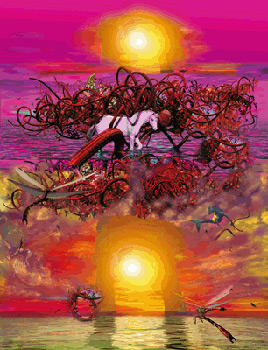 THIS PRESS RELEASE CAME IN THE MORNING MAIL. It is a shining example of academic/museum culture. An initial cue to the tenor of things is the windy title of John Russell’s untitled painting. [Scroll down.] If you see only two glowing suns, not three as announced, do not fret. The third will show up sooner or later in another replicate. It is an inkjet print—quite a huge one—on polyester. Russel exhibited the identical central image in a group show at the Royal Academy, London, in 2008.buy Continue Reading