As the press tells it, this year’s consecration of Russia, together with Ukraine, was undertaken at the bidding of Ukraine’s Catholic bishops. Beneath the religious-sounding string of catchwords and rebukes, it is a secular declaration pronounced for political purposes. The media-driven orthodoxy of the day—Putin, evil; Zelensky, heroic—resurrects an outmoded cultural diktat. It serves neither the Church nor the truth of things.

Russia is no longer the font of atheistic materialism as Cardinal Burke believes it to be. His recent claim that “the great evil of Communism must be healed at its root” is true. But the good cardinal mislocates its base.  The root system has migrated. It is not necessary to be a Putin apologist to see where the determinants of communist materialism have moved. Today, their main ground and stimulus is China, with the West fertilizing their spread.

The language of Francis’ act of consecration reads less like a prayer than a scolding cribbed from sanctimonious world-improvers jetting between Davos and the UN. Francis shakes his finger, feeding us lines to recite as we beat our chests and confess our sins to the World Economic Forum:

We have disregarded the commitments we made as a community of nations. We have betrayed peoples’ dreams of peace and hopes of the young.

We grew sick with greed, we thought only of our own nations and their interests, we grew indifferent and caught up in our selfish needs and concerns.

Accusations pile up. We grew “arrogant and aggressive” and stockpiled weapons. We have betrayed our common home; “ravaged the garden of the earth with war.” It gets mawkish: “We have run out of the wine of hope, joy has fled, fraternity has faded.” The “we” of this broad-brush libel is Western man. (Non-European peoples of his fancied pueblo are exempt from indictment.)

A “community of nations” is a globalist delusion, not a religious tenet. Nations form alliances—leagues, treaties, blocs. These shifting ententes are not what is meant by community. Neither is Francis’ sentimental abstraction, “the human family,” in the Gospels or the Creed.

Nations exist to protect their own interests. The moral quality of those interests, and the means to advance them, is hard to determine in a world anxious to scuttle Judeo-Christian reasoning. Instead we suffer the presumptions of unaccountable bureaucrats. A self-selected power network, they position themselves outside the constitutional constraints of the existing world order. Pope Francis embraces their enthusiasms.

Our Lady of the Great Reset, ora pro nobis.

Francis’ approach to the war in Ukraine is shamelessly crude. Within days of the ballyhooed consecration, Francis held up a Ukrainian flag. And kissed it. No cock crowed. Still, the kiss was a betrayal. The gift of the flag was a prearranged publicity stunt that threw papal weight behind only one of two consecrated nations. The spectacle ratified Ukraine’s demands for the very arms that Francis condemns—and which aim at the second consecratee.

Curiously, this was not the state flag. Ukraine’s unadorned bicolor is not emblazoned with printing. What was Francis flaunting? Michael Matt identified it as the battle flag of the 4th Cossack Company, a combat unit in Ukraine’s 2014 Maidan Uprising. (I can’t confirm. But Matt does his homework.)

Our Vicar of Peaceable Living says nothing about the lethal end-game implicit in Zelensky’s reckless calls for a no-fly-zone over Ukraine. Instead, he encourages war fever under cover of a seemingly tender gesture.

Francis ignores the complexities of competing narratives and the dangers of credulity. He condemned the reported massacre at Bucha with no apparent knowledge of creditable uncertainties swirling around the “massacre” and, more recently, the Kramatorsk train station. Or Mariupol before that. The propaganda mills that spent the last five years lying to us 24/7 about supposed Russian disinformation now disdain even the possibility of Ukrainian disinformation by a media-savvy president.

Zelensky himself is a media creation. 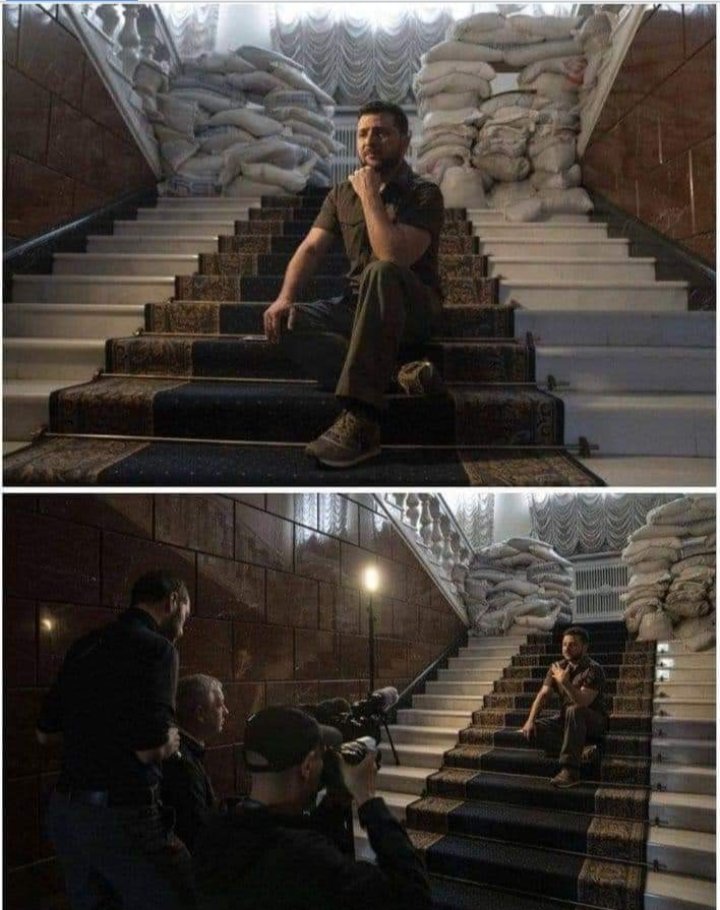 You can peer into the smoke and mirrors here, here, here, and here. Follow the interior links. Zelensky’s history with media oligarch Ihor Kolomoisky also bears a search. Michael Matt’s clear-eyed commentaries on Remnant-TV.com are useful.

Francis’ act of consecration is chastisement camouflaged as prayer, “We stopped being our neighbor’s keepers and stewards of our common home. We have ravaged the garden of the earth with war.” He does not need to name fracking and oil drilling as co-ravagers. He already demonized the “extraction industry.” The greening of the Catholic conscience went full throttle in 2015, the year of Laudato Sí and the papal call for divestment in the fossil fuel industry.

Only in sacred myth has earth been a garden. Without man’s God-given wits, our planet would remain what it was in the murk of geologic time: a daunting, inhospitable wilderness. Francis’ lunatic hostility to fossil fuel increases the likelihood of conflict over resources as the world sinks back to pre-industrial conditions.

The stench of those conditions is already here.  Read Marco Rubio’s essay in The Federalist: “Biden Admin Prioritizes Climate Fantasies While Famine Threatens The World.” When asked to open some four million acres of high quality farmland that are currently withheld from production under the Conservation Reserve Program, Biden refused:

As an explanation, his Agriculture Secretary Tom Vilsack told the National Grain and Feed Association that re-opening the farm land would have “a significant and detrimental impact on producers’ efforts to mitigate climate change.”

Francis addresses Mary in bloated terms that grant her jurisdiction over history : “Queen of the Human Family, show people the path of fraternity. Queen of Peace, obtain peace for our world. . . . You are able to untie the knots of our hearts and of our times. . . . Ark of the New Covenant, inspire projects and paths of reconciliation. Queen of Heaven, restore God’s peace to the world.”

Fraternité is the civil dogma of a secular state. It displaces the habit of charity—caritas—a theological virtue. Worse, it ignores the transcendent nature of the peace Jesus promised: “Peace I leave with you; my peace I give unto you, not as the world giveth, give I unto you. Let not your heart be troubled.” The peace pledged is eschatological. It does not imply freedom from strife in worldly caldrons of our own making.

Compare the simplicity of the “Hail Mary.” The prayer’s clarity and restraint have endured since the eleventh century. It greets Mary with the words of the angel and salutes her status as the mother of Jesus (“blessed art thou among women and blessed is the fruit of thy womb”). The prayer makes no ornate petitions. It does not grant Mary the powers of a godling. It asks only that she “pray for us sinners now and at the hour of our death.” In the decorum of that request is a cry of the heart that transcends the chaos of events in turbulent times.

Prayer is essential. And in the fog of televised war, so is skepticism.

Propaganda is a total system that one must accept or reject in its entirety. . . . What happens when the Church avails itself of propaganda is a reduction of Christianity to the level of all other ideologies or secular religions. . . . [By engaging in propaganda] the Church becomes a false church. It acquires power and influence that are of this world, and through them integrates itself into this world. . . it becomes a purely sociological organization.

Print This Article
Previous Post: Consecration Of Russia Served In A Whirlwind (part 1)
Next Post: Eucharistic Revival And A Ritz Cracker