Knowledge of the early and mid-twentieth century is slipping inexorably away from us. Our capacity to understand and evaluate the present evaporates with it. What Fernand Braudel called “the fragile are of writing history” has been largely replaced by burlesques of our inheritance posing as indictments of the past.

Too few remember even the names of the critical events of World War II. How many of today’s high school and college students have ever heard of the Battle of the Bulge? Winston Churchill called this last major offensive on the Western Front “the greatest American battle of the war.” It was a turning point in the war, a landmark battle that defeated Hilter’s last effort to turn the tide of war in Germany’s favor. Yet few of our contemporaries have any idea of the degree to which they owe their freedom to the ferocity of those six weeks in the Ardennes Forest.

In the wake of the U.S. retreat from Afghanistan, Studio Matters made brief reference to the Battle of the Bulge. Today, on the eve of the battle’s seventy-seventh anniversary, it is crucial to remember the cost of what was won. Yet little commemoration appears in popular media. It is left to small venues run by men and women—though mainly men—who know the worth of self defense. Sam Jacobs, writing for Ammo, is one of them:

When we think about American GIs in the European theater of World War II, much of our image comes from the Battle of the Bulge. Named so because of the distinctive “bulge” shape of the front lines, this is where so many American men laid down their lives on fields of frozen mud in France.

The Battle of the Bulge was the result of Hitler’s last dying gasp lashing out against the increasing pressure of the Allied forces in France. Hitler’s goal was to drive a literal and metaphorical wedge between the United States and the United Kingdom.

All told, the battle was six weeks of fierce winter fighting in the forests of the Ardennes region of France. The nearly ceaseless combat took place between December 16, 1944, to January 25, 1945, in the bitter, freezing cold.

Casualty figures vary widely. According to the Department of Defense, there were 75,000 American casualties. Of these, 19,ooo were killed; another 26,000 captured or missing; 62, 489 wounded. Tabulations are clean, unbloodied. Numbers wipe the gore from men with limbs blown off, faces shattered, bodies gutted. They obscure the punishing realities of trench foot, frostbite, and pneumonia.

The cruelty of war is all the more reason to know how to win—thereby end—one. 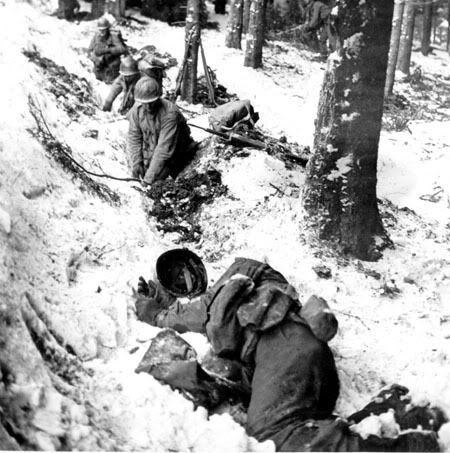 The attack was a complete surprise to Allied commanders, who were overconfident due to a string of recent victories. What’s more, poor weather in the area made air reconnaissance difficult to impossible. When 410,000 Germans came marching into the Ardennes, Allied forces were woefully unprepared for the attack. [That number is cited by Hitler’s Last Gamble, a text listed in Wikipedia’s very useful bibliography. The U.S. Army overview cites a lower number: over 200,000 Germans. History.com cites some 30 divisions, a range of 300-450,000 men. Britannica offers no troop numbers]

Indeed, the respite in the Ardennes was supposed to be for letting seriously battle-fatigued soldiers get some much-needed rest and relaxation. The Allied intelligence thought that the Germans were using this area for similar purposes, and so sent small numbers of men out there to secure the area, which they considered completely safe .  .   .   .

The American battles of the Northern Shoulder [of the Bulge] are considered the most decisive of the entire campaign. Despite being outnumbered five to one, they were able to inflict a casualty ratio of 18 to 1 (in no small part thanks to the 30-06 powered M1 Garand battle rifle) in a battle where 20 percent of their effective force was taken out of the fight.

When the Allies engaged the Germans during the Battle of the Bulge, they were fighting a very different Army than the one that had conquered France the first time. After repeated assassination attempts by members of the Regular Army, Hitler became increasingly paranoid, relying more on the political troops of the SS. As such, the units involved in the Ardennes Campaign were more chosen for their loyalty to Hitler and Nazi ideology than they were for their acumen in battle. .  .  .

The Battle of the Bulge is interesting for another historical reason. It is the first time in American history when racially integrated units fought on the battlefield. Faced with a massive shortage of men, General Eisenhower moved black soldiers from support positions and segregated units into the main of the fighting force.

Education reluctant to prepare for warfighting.

In September, City Journal ran a devastating essay, “Putting the “War” Back in War Colleges,”  by two military historians at the U.S. Army War College:

Though errors made by policymakers certainly played a part, our military lost in Afghanistan because it no longer knows how to fight and win wars. This wasn’t because our military professionals lack will or effort but because they have forgotten the real purpose for which militaries exist. Nowhere is this truer than in America’s war colleges—the schools our nation established to teach officers how to fight and win wars. The plain fact is that these schools no longer teach warfighting.

In the wake of the Vietnam debacle, American military education has “prepared graduates to avoid armed conflict, not prevail in it.” In 1967, the commandant of the U.S. Army War College wrote that developments since World War II made the old, warfare-focused curriculum “outdated.” As the American military flailed away aimlessly in Vietnam, he argued that “today’s military professional, while first and always a soldier, must also be a diplomat, an economist, a scientist, a historian, and a lawyer.”

This view evolved from the belief that modern conventional and nuclear wars were so devastating that they were no longer worth waging. Political and military leaders sought to make war impossible, and military educators embraced Sun Tzu’s widely misunderstood aphorism, “To subdue the enemy without fighting is the acme of skill.” American military professionals must be diplomats, economists, scientists, historians, and lawyers, the thinking went—not to be better at fighting wars but so that the United States would not have to fight wars at all. Professional military education prepared graduates to avoid armed conflict, not prevail in it.

No wonder that graduates of such a system produce weak strategiesthat fail to explain how our armed forces will fight and win through the intelligent application of force. Instead, these strategies rely on “whole of government” approaches: help from politicians and civilian agencies. If such approaches were viable, civilians in authority would already have employed them and wouldn’t have needed the military in the first place.

The system is broken because the theory at its heart—that wars can always be avoided, and that it is the responsibility of professional soldiers to do the avoiding—was wrong. Preparing not to fight wars has neither averted nor won America’s wars.

This alarm, published in a civilian journal, needs to be read in full. And by remembering the Battle of the Bulge  we assert the importance of maintaining our competitive advantage in the emerging ways of war.

These will come, unsought and inexorable. 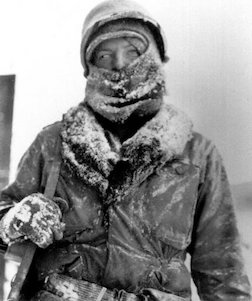